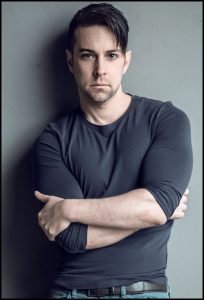 John’s first libretto with composer Clint Borzoni, When Adonis Calls, was selected for inclusion in Fort Worth Opera’s 2015 Frontiers showcase and Opera America’s 2017 New Works Forum.  It had its world premiere at Asheville Lyric Opera in 2018, directed and choreographed by the librettist. John’s second collaboration with Borzoni, The Copper Queen, won the top prize Arizona Opera’s commission program, Arizona SPARK and premiered in 2021 as an award-winning feature film. John and Clint are currently in development with The American Opera Project on the holiday opera, The Christmas Spider. John was commissioned by Washington National Opera’s American Opera Initiative to create an original work with composer Christopher Weiss. The resulting piece, Service Provider, premiered at The Kennedy Center in 2015, and has since been performed by Urban Arias, Opera Memphis, Hawaii Opera Theater, Virginia Opera, Opera Idaho, Westminster Opera Theatre, and was selected as the first opera performed by the Lake George Music Festival. In 2019, his one-act collaboration with Scott Bradley Joiner, The Shower, premiered at the Vienna Summer Music Festival. Over the summer of 2020, John and composer Marc Migó were commissioned by UrbanArias to write an operatic film as part of Decameron Opera Project. The film, The Roost, was directed by John and was then included in the archives of the Library of Congress. John is a co-librettist for Ghosts, composed by Nicolas Reveles, and will direct the premiere at San Diego Opera in 2023. John has also collaborated with composers Robert Paterson, Tony Solitro, and Lingbo MaJohn has served as librettist and stage director at The Juilliard School and Manhattan School of Music.

From 2003 to 2010, he served as resident choreographer for the Fort Worth Opera which included the world premieres of Frau Margot and Before Night Falls. John made his directing debut there with Carmen, followed by The Mikado, The Pearl Fishers, Maria de Buenos Aires, and La Traviata. John has served on the directing faculty of the Seagle Music Colony in Schroon Lake, NY, where his productions have included Anything Goes, Crazy for You, The Medium, The Fantasticks, The Mikado, La Boheme, Guys & Dolls, Brigadoon and L’Italiana in Algeri. John has also coached young artists with the Washington National, Arizona, Fort Worth, and Des Moines Metro Opera Companies.

Other productions include Italienisches Liederbuch for Voces Intimae, The Golden Apple and the world premiere of Pure Country for Lyric Stage, Spring Awakening and Dogfight for WaterTower Theatre, and Carousel for Ashlawn Opera. For the Dallas-based theatre company Uptown Players, John choreographed the American premiere of the Pet Shop Boys musical Closer to Heaven, the regional premiere of Altar Boyz (for which John was awarded the DFW Critics Forum Award for Best Choreography), and directed and choreographed the regional premiere of Hello Again and the American premiere of Soho Cinders. John is originally from San Antonio, Texas, where he performed as a principal member of the Alamo City Dance Company. He received his BFA in Theatre/Film Performance & Direction from Texas Christian University.

This site uses cookies. By continuing to browse the site, you are agreeing to our use of cookies.

We may request cookies to be set on your device. We use cookies to let us know when you visit our websites, how you interact with us, to enrich your user experience, and to customize your relationship with our website.

Click on the different category headings to find out more. You can also change some of your preferences. Note that blocking some types of cookies may impact your experience on our websites and the services we are able to offer.

These cookies are strictly necessary to provide you with services available through our website and to use some of its features.

Because these cookies are strictly necessary to deliver the website, refusing them will have impact how our site functions. You always can block or delete cookies by changing your browser settings and force blocking all cookies on this website. But this will always prompt you to accept/refuse cookies when revisiting our site.

We fully respect if you want to refuse cookies but to avoid asking you again and again kindly allow us to store a cookie for that. You are free to opt out any time or opt in for other cookies to get a better experience. If you refuse cookies we will remove all set cookies in our domain.

We provide you with a list of stored cookies on your computer in our domain so you can check what we stored. Due to security reasons we are not able to show or modify cookies from other domains. You can check these in your browser security settings.

We also use different external services like Google Webfonts, Google Maps, and external Video providers. Since these providers may collect personal data like your IP address we allow you to block them here. Please be aware that this might heavily reduce the functionality and appearance of our site. Changes will take effect once you reload the page.